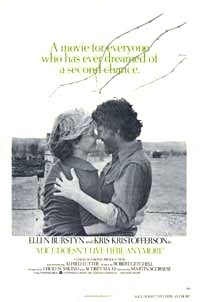 Now and then, the most prolific directors have underrated movies. A good example is Martin Scorsese's Alice Doesn't Live Here Anymore, which I will be reviewing.

When the husband of housewife Alice Hyatt (Ellen Burstyn) is killed in a road accident, she sells her belongings and takes her son Tommy (Alfred Lutter) to Monterey, California. But after nearly running out of money, she takes a job as a waitress in Tucson, where she meets divorced local rancher David (Kris Kristofferson).

I can see why this is a lesser-known movie from Scorsese. the film focuses on a female character rather than a male. well, that and it was made between Mean Streets and Taxi Driver. But I fail to see why so many people overlook it, even though it won Burstyn an Oscar.