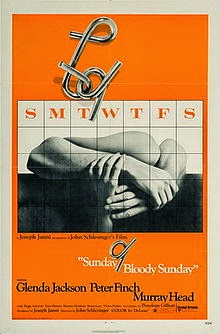 Relationships in fiction are often only depicted one of three ways: straight, gay and lesbian. They're all fine but very rarely do you see bisexuality in fiction. Characters are either straight or gay, nothing in between.

This is why John Schlesinger's Sunday, Bloody Sunday is a nice departure from what's usually seen. Focusing on the complicated relationship between doctor Daniel (Peter Finch), divorcee Alex (Glenda Jackson) and sculptor Bob (Murray Head), it's far from the usual LGBT fare we frequently get nowadays. It's a film about people and their complexities.

Here's the thing about Daniel and Alex. They're fully aware that Bob is seeing both of them and they're fine with the situation (though the occasional pang of jealously passes through them). This is another feature of Sunday, Bloody Sunday that's very rarely highlighted in fiction: polyamory. Many relationships focus on only two people. If a third person's involved, that's frequently a sign of cheating.

This had to have been a daring film to make at the time. Not was it depicting sexual relationships as a normal aspect of everyday life, it was made at a time when opinions on sex were changing. (This was made four years after homosexuality was legalized in Britain.) And much like Carnal Knowledge (released the same year), the film shows how sex isn't so straightforward.

Sunday, Bloody Sunday is a gorgeously complex film. (Would you believe this was Schlesinger's follow-up to Midnight Cowboy?) It's been more than forty years since its release, and we still haven't made much progress when it comes to depicting various types of relationships and sex. How much longer until we have?