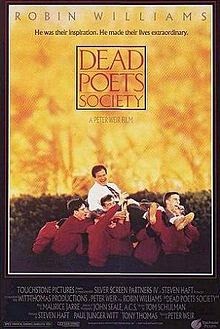 Robin Williams' sudden death last August left an unspeakable loss throughout the entertainment industry. He wasn't just a comedian. He was an actor, a performer, an entertainer. He was one of a kind.

His work in Peter Weir's Dead Poets Society is one of several examples that proved Williams' abilities as an actor. (Other examples include Good Will Hunting and One Hour Photo.) Here, he provides a performance that's honest and down-to-earth. (The latter is certainly not something you can easily apply to some of Williams' other roles.)

Admittedly there are some elements in Dead Poets Society that are now a bit hard to watch, particularly if you know how Williams met his fate. That said, however, there are other elements of the film that are all the more poignant because of Williams' passing. Very rarely does the latter happen.

But Dead Poets Society isn't just Williams' show. There are a number of young actors amongst the cast. (Some of the actors include the likes of Robert Sean Leonard and Josh Charles long before their big breaks on television and a baby-faced Ethan Hawke.) They're all great in their roles.

Dead Poets Society works most of the time but not all of the time. Thanks to the work from Williams and the young actors, the film could easily be an influence for those who watch it. Carpe diem, after all.