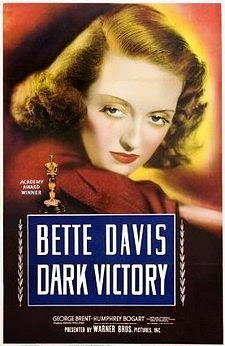 Early on in Edmund Goulding's Dark Victory, socialite Judith Traherne (Bette Davis) has a horse riding accident but suffers no serious injury. However, she admits to having headaches for several months. She receives grim news from Dr. Steele (George Brent): she has a brain tumor.

In a stark contrast to some of Davis' other roles, Judith is noticeably more upbeat than, say, Margo Channing or Mildred Rogers. It's partly because of her gaining a new lease on life but it's also a way to cope with the fact that she's dying. (People react to bad news in different ways after all.)

Even after over seventy years, Dark Victory hasn't lost much of its emotional impact. (That's more than can be said about other films released the same year.) Very rarely does melodrama stand up after all these years. (Even Douglas Sirk's films haven't stood up to the test of time in their entirety.)

Dark Victory also contains one of the ten performances that earned Davis an Oscar nomination. It doesn't take much to see why. Here, Davis continues to prove why she's one of the greats of Hollywood's Golden Age. (Goulding supposedly had Davis channel her distress over her personal life into her performance.)

Dark Victory shows its age in some scenes but overall it remains solid. Thanks to the work from Davis, the film has a brisk delicacy not often seen nowadays. (Sometimes you just can't beat the classics.)