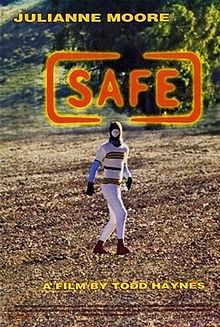 Carol White (Julianne Moore) of Todd Haynes' Safe has a good life though a dull one. Married but sexually unsatisfied, a housewife though bored, content yet ambitionless. Then...something...begins to happen to her.

In a stark contrast from Haynes and Moore's next film Far From Heaven, Safe moves away from the comfortable domesticity of the former film. It instead focuses on the suffocating nature of life people sometimes encounter. (It is common, you know.)

It's a small detail of Safe but it's one worth bringing up. The white noise heard throughout the film adds a certain sense of paranoia. The noises from television sets and radios only makes it more clear that something isn't right with Carol.

And Moore's performance is one that must be seen. This was only a few years before she got her first of five nominations, and it's clear that her work here should have gotten more recognition than it did. This was proof that she really knew what she was doing as an actress.

Safe has its flaws but it really gets under your skin. Thanks to the work from Haynes and Moore, it's a film that will linger in your mind long after it's finished. Sometimes the scariest things are those around you...