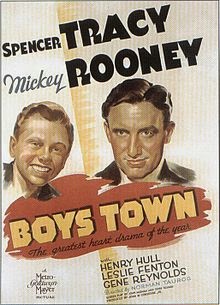 Early on in Norman Taurog's Boys Town, Father Flanagan (Spencer Tracy) is inspired to open a home for wayward boys. It's not an immediate success but fortunately donations start to pour in.

Enter Whitey Marsh (Mickey Rooney), a small-time hoodlum who acts like he's James Cagney. Father Flanagan has hope that he can reform Whitey. But Whitey proves that he's a tough nut to crack.

The contrast between Father Flanagan and Whitey is an interesting one to watch. Flanagan is patient while Whitey is short-tempered. Kind against volatile. Caring against careless. It's the sort of yin yang that was often seen in films from the era (and something that should come back into practice for today's films).

And the performances from Tracy and Rooney make Boys Town what it is. Tracy (who won an Oscar for his work) provides the right amount of sentimentality for the role. Rooney, meanwhile, gives an ornery performance which gradually softens as the film wears on. They're not the best performances of all time but they make the film work.

Back in 1938 this might have been immensely popular but nowadays, Boys Town doesn't pack the same punch. If it weren't for the performances from Tracy and Rooney, there's a strong possibility it would have been buried amid the many titles of that year. That said, it's still worth a look.

My Rating: ****
Posted by MovieNut14 at 10:49:00 PM
Email ThisBlogThis!Share to TwitterShare to FacebookShare to Pinterest
Labels: 1930s, movies, reviews