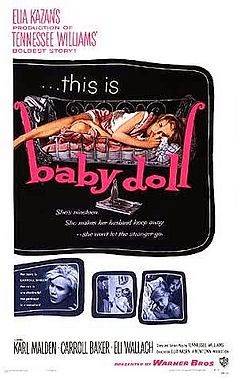 It's established early on in Elia Kazan's Baby Doll that Archie Lee Meighan (Karl Malden) and his child bride Baby Doll (Carroll Baker) aren't exactly living in the best conditions. Their house is falling to pieces, they're constantly arguing...it's only a matter of time before something else catastrophic happens.

Enter Silva Vacarro (Eli Wallach), Archie's competitor in the cotton business. Infuriated, Archie burns down Silva's cotton gin. Silva, having a good idea as to who did it, plans to seduce a confession out of Baby Doll.

By many means, the premise would read rather tame nowadays. But bear in mind this was released back in 1956 (and was written by Tennessee Williams), so naturally some controversy bubbled up. And boy, you can see why. It's easily the most sexually charged work of Williams' career. (And this is someone who wrote A Streetcar Named Desire and Cat on a Hot Tin Roof.)

Now onto the performances. Malden, a familiar face amongst Kazan's films, shows a stormy nature that merely hides Archie's insecurities. Baker in turn highlights a provocative nature beneath her supposed innocence. But Wallach makes one hell of an impact with his film debut. Very rarely do you see a performance this fiery and driven. (God, did we lose one of the greats last year.)

Baby Doll is easily one of the unsung greats of both Kazan and Williams' careers. It's a film that was way ahead of its time and it hasn't lost any of its bite. Be sure to see this film.