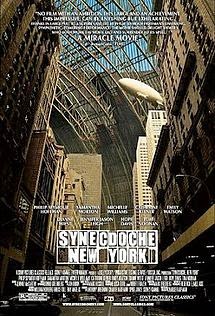 The first several scenes of Charlie Kaufman's Synecdoche, New York establish how average Caden Cotard's (Philip Seymour Hoffman) life is. Decent home life, steady job, nothing too out of the ordinary. But then his health starts to deteriorate and he begins an ambitious project.

Kaufman is a familiar name for his quirky but original screenplays such as Being John Malkovich, Adaptation and Eternal Sunshine of the Spotless Mind. So how did he fare with his directorial debut? Well, you can definitely tell it was written by him. (That's always a good sign, having a distinct writing style.)

Though as the film progresses, you have to wonder about what's being shown. Is all of this actually happening or is what we're witnessing the result of Caden's decaying health? Kaufman doesn't make it very clear though it is fascinating to see the line between fiction and reality slowly become nothing.

Seeing as this is a philosophical film about life, it's become more bittersweet to watch because of Hoffman's passing last year. Watching Caden wither away into an old man is harder to watch knowing full well that Hoffman would never experience that in his lifetime. Like James Dean and Marilyn Monroe in the decades before him, Hoffman was a Hollywood legend that's forever young.

Synecdoche, New York is something that only a select few would truly appreciate. It's not your usual cinematic fare but it's also worth a look. (In other words, if you like Kaufman's writing, you'll probably like this.)

My Rating: ****
Posted by MovieNut14 at 6:22:00 PM
Email ThisBlogThis!Share to TwitterShare to FacebookShare to Pinterest
Labels: 2000s, movies, reviews