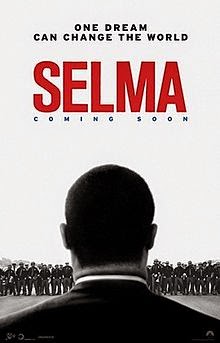 There's a sort of cruel irony with Ava DuVernay's Selma. We listen to Martin Luther King, Jr. (David Oyelowo) as he speaks of equal rights while the society we currently live in has barely made any progress within the last fifty years.

Much like how Fruitvale Station was released amid the frenzy of the George Zimmerman trial, Selma was released following the outrage over the failure to indict the murderers of Michael Brown and Eric Garner. All of these acts of pointless violence is just proof that, to quote George Santayana, those who cannot remember the past are condemned to repeat it.

Similar to The Imitation Game, Selma focuses on the life of a revolutionary man rather than the tragic way it ended. But unlike The Imitation Game, which depicted Alan Turing as a martyr because of his homosexuality, Selma doesn't make King (or any of the other characters) a sinner or a saint. The film merely depicts him as what he was: a human being.

Speaking of the other characters, Selma is more than just a film about King. (Oyelowo, by the way, is electrifying as King.) Selma is a film about, well, the people of Selma. DuVernay and cinematographer Bradford Young both focus on the many faces of the small Alabama town, showing how crucial they are to both the story and to history.

Selma is without a doubt a film that will stand out as the years pass. Thanks to DuVernay, Oyelowo and the many other actors involved, this is a film that will resonate with those who watch it.

My Rating: *****
Posted by MovieNut14 at 7:03:00 PM
Email ThisBlogThis!Share to TwitterShare to FacebookShare to Pinterest
Labels: 2010s, directed by women, movies, reviews