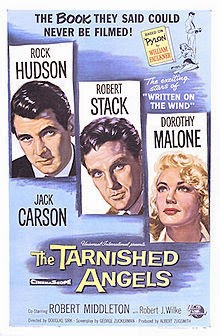 Early on in Douglas Sirk's The Tarnished Angels, reporter Burke Devlin (Rock Hudson) gets a scoop in the form of stunt pilot Roger Shumann (Robert Stack) and his wife LaVerne (Dorothy Malone). Through LaVerne, Burke finds out that Roger is far from the dashing pilot image that he puts on.

It doesn't take long to realize that The Tarnished Angels is a stark contrast from Sirk's other titles like All That Heaven Allows and Magnificent Obsession. It's more jaded than the usual fare Sirk is renowned for. (Being based on a William Faulkner story might have something to do with it.)

And the performances from the trio of actors are great. Stack and Malone (both recognized for their work in Sirk's earlier film Written on the Wind with the latter winning) give their roles a troubled but raw edge. And Hudson proves (as he had with his other collaborations with Sirk) that he's capable as an actor. (His drunken monologue towards the end is a prime example.) It would be another nine years before Hollywood could see what Hudson could do. (The result being Seconds.)

The Tarnished Angels is easily Sirk's best film. It's a shame that Sirk made only two more films before retiring. He was really starting to make great films.