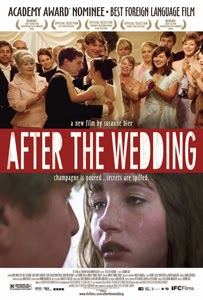 Susanna Bier's After the Wedding starts off on relatively normal terms. In an effort to stay in good graces, Jacob (Mads Mikkelsen) attends the wedding of a businessman's daughter. But it's during the reception that things begin to unravel.

Many times in fiction do you see calamities at wedding ceremonies. (Most of the time it's in comedies and before the actual ceremony.) But with After the Wedding, none of the calamities are of a comedic nature. (It's a Danish film, so what else can you expect?)

Also a familiar feature in fiction is how the dynamics between people can change. Throughout After the Wedding, this happens with the characters. The people they start as and the people they end up as are stark contrasts.

Though by many means, what's shown in After the Wedding isn't anything original. If you're familiar with any standard family drama, what happens in the film becomes rather obvious. Still, Bier manages to make the most out of the familiar traits.

All in all, After the Wedding is good but not great, That said, however, Bier and the actors know how to hit the right notes. In other words, it's worthy of a look.

My Rating: ****
Posted by MovieNut14 at 7:08:00 PM
Email ThisBlogThis!Share to TwitterShare to FacebookShare to Pinterest
Labels: 2000s, directed by women, movies, reviews