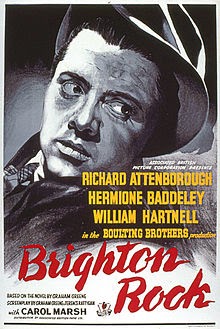 "This is a story of that other Brighton - now happily no more." So begins John Boulting's Brighton Rock. Based on the novel of the same name by (and co-adapted by) Graham Greene, it's a film with a compelling and very different view on redemption.

Starring in Brighton Rock is Richard Attenborough. Similar to Richard Widmark's work in Kiss of Death (also released the same year), Attenborough's Pinkie Brown is a gangster with no qualms over his violent actions. His face remains unmoved though this is a performance that relies on the eyes. Look at them.

Similar to other crime films of the era like Pickup on South Street and Odd Man Out, Brighton Rock focuses on the seedy side of the big city. The people of the city play just as a crucial role as the crimes committed. To quote The Naked City, "There are eight million stories in the naked city. This has been one of them."

So where does the element of redemption come in? That is in the form of Rose Brown (Carol Marsh), a waitress who gets unwittingly ensnared in Pinkie's criminal behavior. She (wrongfully) assumes that Pinkie is interested in her. (For his sake, it's because she knows too much.) Will she be able to make him change his ways?

Brighton Rock is very good thanks in part to one hell of a performance from Attenborough. (The script by Greene and Terence Rattigan certainly adds something as well.) Definitely worth a look, especially for that bitterly ironic ending (which, to no surprise, was changed from the book's).

My Rating: ****
Posted by MovieNut14 at 11:35:00 PM
Email ThisBlogThis!Share to TwitterShare to FacebookShare to Pinterest
Labels: 1940s, movies, reviews