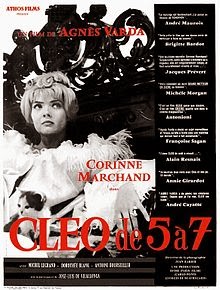 The opening moments of Agnes Varda's Cleo from 5 to 7 have singer Cleo Victoire (Corinne Marchand) receiving grim news from a fortune teller. She fears she has cancer. While waiting for her test results, she witnesses the sights, sounds and people of Paris.

Cleo by no means is a deeply likable person. She's often quick to anger and she possesses an arrogant air. (She's frequently called "spoiled" by some of her acquaintances.) But as the film wears on, she gradually softens into someone more sympathetic.

What Varda does with Cleo's perspective is very subtle. It goes from her being the center of attention to being one of the many people walking the Paris streets. It's a quiet detail but a very distinct one.

Similarly, the cinematography by Jean Rabier captures the film much like a photographer would. It focuses on the faces, buildings and bustle of Parisian life. Much like how Control and Ida would be shot in the following decades, Cleo from 5 to 7 is shot like photographs coming to life.

Cleo from 5 to 7 is hypnotic and beautiful. It's a quiet film but Varda and Marchand do wonders with it. It's also proof that female film directors should get more recognition than they currently do. (Honestly, more progress in the film industry would be nice, don't you think?)