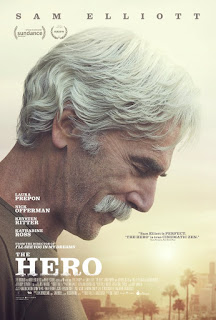 You know how some movies have roles that were written specifically for their actors? Sometimes it's after regular collaborations, other times it's who the writer aspire to see in that role. Most of the time the intended actors don't accept the role but there are those few exceptions.

It doesn't take much to see Brett Haley's The Hero has one of those exceptions. Going by some of the dialogue, the character of Lee Hayden was most definitely written for Sam Elliott and him alone. Between the allusions to his golden and distinct mustache to his background in westerns, it gets kind of blatant after a while. (They even cast real-life wife Katherine Ross as his ex.)

But what is The Hero about? It follows out-of-work Lee as he interacts with family and friends, tries to get a gig, and comes to terms with a cancer diagnosis. Admittedly it has many tropes we've seen countless times before (Lee's estranged from his daughter, has a fling with a younger woman) though Elliott more than makes up for them.

Much like what he did with Blythe Danner with his previous film I'll See You in My Dreams (where Elliott has a supporting role), Haley provides a solid role for Elliott to sink his teeth into. After decades as a character actor, it's nice to see his name first and foremost on the poster.

The Hero follows the usual conventions found in similar works but maintains solid material for its lead. As he did with his previous film, Haley has an actor of a certain age get their due as a performer. And as this and his previous film have proven, he'll be around for some time.

My Rating: ****
Posted by MovieNut14 at 10:41:00 AM
Email ThisBlogThis!Share to TwitterShare to FacebookShare to Pinterest
Labels: 2010s, director: Brett Haley, movies, reviews