Smash-Up: The Story of a Woman 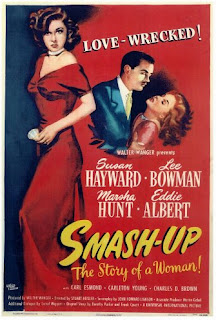 Stuart Heisler's Smash-Up: The Story of a Woman opens at a hospital, focusing on a patient who's heavily bandaged and delirious. The patient is Angie Evans (Susan Hayward), a former nightclub singer. What led her to this situation?

The film goes back to when Angie was still working. After marrying rising singer Ken Conway (Lee Bowman), she becomes a stay-at-home mother as his career begins to skyrocket. But in her attempts to appear happy, she slips deeper and deeper into alcoholism.

There's an element of truth in Smash-Up: The Story of a Woman, it being loosely based on real events albeit with changed names. The character of Angie was inspired by Dixie Lee, the first wife of Bing Crosby. (Her own career came to a standstill as her husband's took off.) It's almost a miracle the studio didn't face a lawsuit from either Lee or Crosby.

As she would do a few years later with I'll Cry Tomorrow, Hayward shows a very ugly side to alcoholism. With The Lost Weekend still lingering in the minds of moviegoers, she further proved how the alcoholic character is far from the comic relief  commonly seen throughout the previous decade; it's a frightful ailment millions of people are afflicted with.

Smash-Up: The Story of a Woman still packs a punch after seventy years, providing a wake-up call for those who indulge themselves in such a destructive craving. (And like any work that depicts the grotesque nature of addiction, it may make those who don't partake in it to stay far away from any such vice.)