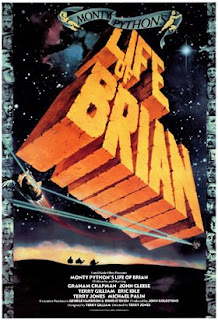 If there's anything that's absolute fodder for immediate controversy, it's any depiction of religion. Anything where the merit of such beliefs are questioned, there will be an uproar of some magnitude. (Even for those that only examine the subject very briefly.)

Once one has seen Terry Jones' Monty Python's Life of Brian, they may not be at all surprised that it was met with some scorn. (The last scene is probably the most audacious thing the comedy troupe had put on film.) But at the same time, it provides a surprisingly smart commentary on the hypocrisy within religion.

Much like the previous endeavors of the sextet, they provide many of the roles in Monty Python's Life of Brian and again have Graham (ironically) as the titular straight man amid the absurdity. That's not to dis the casting decision but it would've been interesting to see a change in their usual lineup. (John Cleese lobbied for the lead before the others convinced him to let Chapman play Brian.)

But let's muse on Chapman for a moment longer, shall we? What would've become of his career had he not died from cancer in 1989? Would he have continued with comedy or would he have ventured into more serious material? It's been almost thirty years since his passing but the questions still linger.

Anyway, Monty Python's Life of Brian still holds up nearly forty years later. It may be (somewhat) more serious than Monty Python and the Holy Grail but that's possibly because of the group's change in style. As any good comedy can prove, it has to be both progressive and accessible to the masses throughout the coming years. And the Pythons have done just that with their many contributions.

My Rating: ****1/2
Posted by MovieNut14 at 1:47:00 PM
Email ThisBlogThis!Share to TwitterShare to FacebookShare to Pinterest
Labels: 1970s, movies, reviews