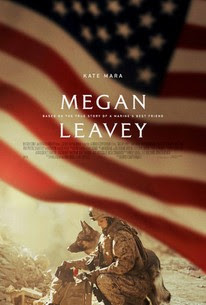 Usually when war stories (be they fictional or factual) get the Hollywood treatment, they tend to boil down to these factors: innocence shattered by bloodshed, moments of high tension, and an inability to forget what was witnessed. But nine times out of ten, these tales of battle are led by men.

Sure, there are some with women as the focus in such narratives but very few of them have women behind the camera. Hence why Gabriela Cowperthwaite's Megan Leavey stands out. Based on real events, it follows the titular Marine (Kate Mara) as she serves her country. But that's not to say everything is as clean-cut as it sounds.

It's established early on that Megan feels out of place amid her surroundings. (There's also mentions that she has difficulty connecting with other people.) Sure, the "outsider in the military" trope is far from anything new though Cowperthwaite shows how women in this profession tend to be treated differently by their peers. (Sometimes not for the better as some reports can verify.)

Though it's her younger sister who's become more famous, Mara proves her own worth as an actress in Megan Leavey. Depicting the many plights her character faces both in and out of combat, she follows in the footsteps of many actors before her in capturing feeling perpetually out of the loop.

Megan Leavey doesn't have a lot to write home about but it's still good nonetheless. In the many years of military films with male leads, it's nice to see women at the helm. (It's not a long way since, say, Zero Dark Thirty but baby steps.)

My Rating: ****
Posted by MovieNut14 at 3:49:00 PM
Email ThisBlogThis!Share to TwitterShare to FacebookShare to Pinterest
Labels: 2010s, directed by women, movies, reviews