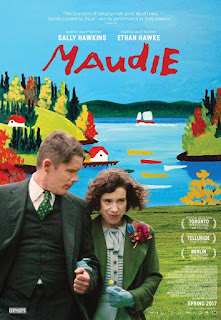 There have been many prominent female painters throughout the years. Kahlo, O'Keefe, Cassatt...some names may not be instantly recognizable to the mass population but their works are. But even then there are those whose names and paintings have gotten lost in the annals of history. (Oh, one of the many plights of identifying as a member of the fair sex.)

Aisling Walsh's Maudie chronicles the life and work of Canadian folk artist Maud Lewis (Sally Hawkins). From her tumultuous family life to her emergence as a painter, she faced a lot of heartache during her time on this earth. But even with the odds stacked against her, she managed to find happiness for herself.

Also part of the film's story is Everett Lewis (Ethan Hawke), who later becomes Maud's husband. His first scene establishes him Everett's temperament, one of quick frustration and rough assertion. It's clear that he's a person who requires someone of immense patience for long stretches of time. And Maud could very well be that someone.

Both Hawkins and Hawke (heh) show in Maudie their worth as actors. They're recent Oscar nominees, yes, but both were in the supporting categories for Blue Jasmine and Boyhood, respectively. Of course, they've carried films by themselves before (Happy-Go-Lucky and Born to Be Blue, for instance) but this film proves they should be given starring vehicles more often.

Maudie has some bumps in the road but it remains modest in depicting Lewis' professional and private lives. Hawkins and Hawke further their profitability as they portray these forgotten figures in Canadian culture, and hopefully this won't be the only time they partake in such character types.

My Rating: ****1/2
Posted by MovieNut14 at 10:40:00 AM
Email ThisBlogThis!Share to TwitterShare to FacebookShare to Pinterest
Labels: 2010s, directed by women, movies, reviews