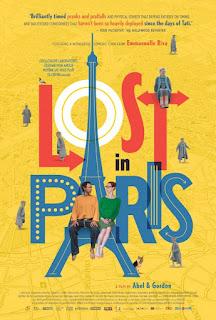 How does one do comedy in a smart manner? In this day and age, it's almost impossible to make one. (We as a society have become reliant on the same formula for this genre as a whole, and only a few have objected to it.) And more often than not, the ones that stand out in recent times don't hail from the United States.

Suffice to say Fiona Gordon and Dominique Abel's Lost in Paris falls into such a category. After being beckoned to Paris for the sake of visiting her aunt Martha (Emmanuelle Riva), Fiona (Gordon) has bad luck follow her the moment she arrives. And the introduction of vagrant Dom (Abel) into her life merely adds fuel to the fire.

The key aspect of Lost in Paris is its finely timed antics. Whether it's a close encounter just missed or one of its many sight gags, it harkens back to the days of Chaplin and Keaton (or -- to acknowledge where the film's set -- Tati). Slapstick is a dying form of comedy. and this has revitalized it.

On a different note, Gordon and Abel seem to have been inspired by Wes Anderson as well. Not so much in the way of the characters (though there's some influence) but rather some of the designs in Lost in Paris. The use of solid colors (and a few of the locations) bear resemblance to Anderson's own films.

Lost in Paris is an enjoyable little comedy, a change of pace from what Hollywood's been churning out lately. (And usually it's France that releases the dirty stuff.) Gordon and Abel may have been making films for several years now, but hopefully this won't be the last time we see new work from them.

My Rating: ****
Posted by MovieNut14 at 10:39:00 AM
Email ThisBlogThis!Share to TwitterShare to FacebookShare to Pinterest
Labels: 2010s, directed by women, movies, reviews