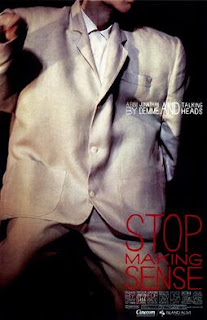 Ever since his passing this April, the world of cinema has become a poorer place with Jonathan Demme's presence. Ever since Roger Corman took him under his wing all those years ago, it was clear that his work would endure. Whether it's Oscar-winning fare like The Silence of the Lambs or more undervalued projects like Rachel Getting Married, it was nigh impossible to not like what he offered.

But as well as feature films, Demme also dabbled with documentaries. Perhaps the most famous of the ones he did was Stop Making Sense. But it's far from the usual cut and dry filmed account. What the viewer is treated to instead is something for the ages.

By no means does one have to be a fan of Talking Heads to appreciate what Stop Making Sense has to offer. Sure, one may watch it solely for the music (not that's there anything wrong with that) but in Demme's hands, he makes it feel as though the viewer has front row seats to the band's three-night concert.

Also taking into account Demme's other works, Stop Making Sense plays out very much like your standard narrative. It doesn't rely on behind-the-scenes footage or shots of the audience (apart from during the last song); it's all about the show.

Stop Making Sense is perhaps the most essential music documentary ever made. Demme, just a few years away from achieving Oscar glory, solidifies his status in Hollywood. And as his later works showed showed, he wasn't going to be forgotten any time soon. (Let's hope it stays that way too.)