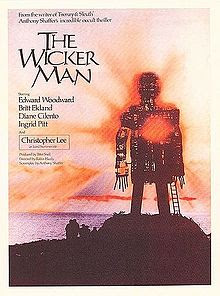 This is generally a rule of thumb. (Or it should be.) Any remake of some sort is usually one to avoid. It's the original film that should be seen. (There are a few exceptions of course, but they're so rare.)

In 2006, Neil LaBute unwisely remade Robin Hardy's The Wicker Man. The end result was an unintentional comedy ("NOT THE BEES!") and a complete failure. If you're wondering, this review's about Hardy's film and not LaBute's. (Like I would even think about watching a crap remake.)

Hardy's film, released thirty-three years before LaBute's, takes its material seriously unlike LaBute's film. It focuses on sex, religion and cults to a very provocative level. (Then again, any film from the 1970s focusing on those subjects would be on that level. After all, The Wicker Man was released the same year as The Exorcist.)

I don't know why, but this films reminds me of Hot Fuzz. (It's not because Edward Woodward, the star of The Wicker Man, had a small role in Hot Fuzz.) I think it's because both films revolve around an outsider police officer visiting a small rural village where the residents act in strange ways. That's only a guess, mind you. I don't know the precise reason.

Anyway, The Wicker Man is fantastic. (Then again, can you go wrong with a film that has Christopher Lee in a juicy supporting role?) But, man, that ending though. It gets under your skin in all the right ways. Truly haunting stuff.

My Rating: ****1/2
Posted by MovieNut14 at 8:46:00 PM
Email ThisBlogThis!Share to TwitterShare to FacebookShare to Pinterest
Labels: 1970s, movies, reviews