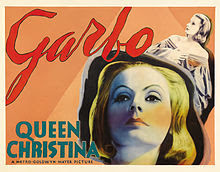 It seems fitting that an androgynous star like Greta Garbo is in a film like Rouben Mamoulian's Queen Christina. The lead role doesn't rely on her to radiate class in a flowing evening gown. Instead, the role has her showing deep devotion in running a country. More specifically, it relies on her mind instead of her body.

When we first see Garbo as Christina, she is dressed in men's attire. (It's also mentioned early in the film that Christina was raised by her father as a boy rather than a girl.) In a later scene, she kisses her female co-star on the lips. (She kissed a few male co-stars cheek to cheek.) She even proclaims she rather "die a bachelor" than marry a prince and present her country with an heir. And these are just a few samplings of what Garbo does.

Enter Antonio, played by Garbo's real-life lover and would-be husband John Gilbert. When he first encounters Christina, he mistakes her for a boy. The charade continues on until she reveals her true identity in, of all places, the room of an inn they're forced to share. There, he brings out the true woman within Christina.

Queen Christina is the kind of film that couldn't be made today. (It's even more of a wonder that it was made back in 1933.) There are a few innuendos that are risky in any era. (Antonio said he "felt it" once Christina revealed she's a woman.) And the gender roles are even bolder than any other period piece of the 1930s. You don't come across a film this daring that often.

Queen Christina is a real tour de force for Garbo. It's not an insanely glamorous role like those common for actresses of the time, but it sure is a hell of a role to sink your teeth into. Hollywood, take note.