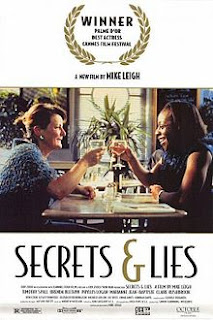 When it comes to modern British social dramas, no one comes close to Mike Leigh in churning out the best the subgenre has to offer. He makes his stories believable and, most importantly, his characters human. (Or, in the case of Naked, inhuman.)

Excluding Topsy-Turvy, Leigh knows how to capture the British working class with complete ease. The in-depth detail he gives his characters is one of a kind. (From what I read, he allows his actors to improvise in order to make their characters more human.) This is the kind of attention directors give to their films that I admire.

Secrets & Lies displays such attention wonderfully. Depicting a troubled small family, the film captures a quiet but conflicted understanding between the characters. Think of the way Leigh tells this story as a sort of British equivalent of a John Cassavetes film. (Okay, maybe not that far, but it's close.)

As with Leigh's other films, the heart of Secrets & Lies rests within the actors. The two primary actors are Brenda Blethyn and Marianne Jean-Baptiste, and as you watch them, it's very clear to see why they got all the awards attention. As Cynthia, Blethyn is a nervous woman who just wants to love and be loved in return. As Hortense, Jean-Baptiste is like Cynthia, but quieter and more composed. Two of the best performances of the 1990s without a doubt.

Secrets & Lies is both one of the best films I've seen and one of the more underappreciated films out there. Why that's the case with the latter, I have no idea. Seriously, go watch it. You won't regret it.