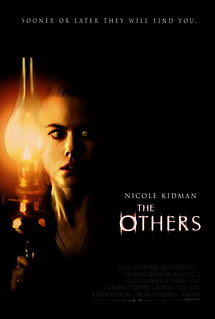 If you were to ask me what makes for a great horror film, I would give you a simple list. The essential elements for any good horror film include a creepy score, equally creepy cinematography (ie, lots of shadows, very little natural light), and not knowing what'll happen next. (Oh, and actors who know what they're doing also helps.)

Alejandro Amenabar's The Others has every single one of those elements and boy, are they in full effect beautifully. Most haunted houses films rely on the usual cliches: the creepy sight in the mirror, the writing on the wall, stuff of that nature. Amenabar wisely throws them out the window.

The leading lady of The Others is Nicole Kidman, an ideal choice for this kind of role. Even with the strange happenings within her home, she keeps her composure until the very end. She doesn't get hysterical the minute something strange happens. She keeps her ground, regardless of who or what is threatening her family.

Amusingly, The Others is much like The Innocents, released forty years earlier. The main connection is that both are loose adaptations of Henry James' The Turn of the Screw, but there's also a deeper bond. Both films revolve around women with quiet inner turmoil in their lives and the workings of their minds slowly starting to unravel. Oh, and both lead performances (Kidman in The Others, Deborah Kerr in The Innocents) are some of the finest works from its actresses.

Anyway, The Others is a brilliant film. Along with directing and writing it, Amenabar also provides a very creepy score that's worthy of Hitchcock. And that ending. Oh, that ending. It's brilliant.

My Rating: *****
Posted by MovieNut14 at 7:09:00 PM
Email ThisBlogThis!Share to TwitterShare to FacebookShare to Pinterest
Labels: 2000s, movies, reviews