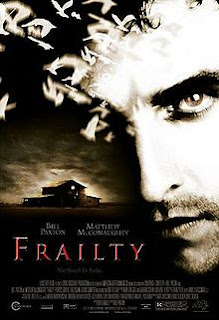 There's always a good omen when the opening credits of a film leave an impact. Take Se7en, Catch Me If You Can and Kiss Kiss Bang Bang as recent examples for this. (Older examples include those designed by Saul Bass.)

Another good recent example is Bill Paxton's Frailty. Depicting crime scenes photos and sensational headlines screaming about murder, they set the framework of what the film is about. And what is Paxton's directorial debut even about? How twisted a man's mental state can become.

You've heard of those case studies where the guilty party claimed God told them to do their deeds? (To me, those cases just send chills up my spine because they don't see the error of their ways.) That is the story Paxton tells his audience and damn, it's a creepy one. A true rarity nowadays.

The actors are just great. Frailty contains one of the few great performances of Matthew McConaughey's career. There's also some really solid work from child actors Matt O'Leary and Jeremy Sumpter. But this show belongs to Paxton. The deadness in his (and McConaughey's) stare is one that you don't forget.

Frailty has to be one of the best horror films of the last ten years. That's pretty much a given. I hope Paxton directs another film as great as this. Dude knows how to make a film. (Oh, and I hope McConaughey gets another role like this. Dude's actually a good actor.)

My Rating: ****1/2
Posted by MovieNut14 at 7:45:00 PM
Email ThisBlogThis!Share to TwitterShare to FacebookShare to Pinterest
Labels: 2000s, movies, reviews