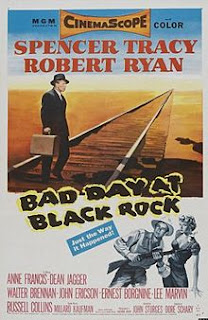 Made in an era of racial discrimination, John Sturges' Bad Day at Black Rock speaks of a time when it was all right for slurs to be spewed. (Of course, it's scorned upon nowadays.) The film also displays some damn fine acting from its stars.

Along with Tracy, the cast for Bad Day at Black Rock includes Robert Ryan, Ernest Borgnine, Lee Marvin, Walter Brennan and Anne Francis. They're all great, especially Ryan, Borgnine and Marvin as the men who want Macreedy out of town. But this is Tracy's show.

Sturges, most famous for The Magnificent Seven and The Great Escape, displays a sort of beauty within the ugliness of the story. The main contributor to that is William C. Mellor's cinematography. It captures the vast landscapes of the west. It's true beauty.

Bad Day at Black Rock seems slightly out of date nowadays (though it can be relateable with the response to 9/11), but it must have been a real eye opener back in 1955. With a cast like this, can you really go wrong?