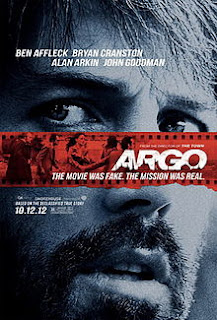 There are always those names in Hollywood that are basically the butt of everyone's jokes. Usually it's from a string of misfires they starred in. Other times it's because of a highly publicized incident. (Remember Tom Cruise jumping on Oprah's couch? Or Joaquin Phoenix's stunt on David Letterman? Or Robert Downey, Jr. during the 90s?) You honestly wonder if they'll ever be taken seriously.

Take Ben Affleck for example. After winning an Oscar for co-writing Good Will Hunting, his career sort of went...downhill. A string of critical bombs, a highly publicized relationship with Jennifer Lopez and just bad judgment on the movies he did (Gigli, anyone?) made him go from A-list actor to C-list joke. Then he made Gone Baby Gone and The Town, and Affleck got the last laugh. (How do like them apples?)

In fact, Affleck's new film Argo might have him laughing all the way to the Oscars. The reason? It's to date his best work as a director. (And maybe as an actor.) You honestly don't see a film this brilliant and gripping nowadays.

What makes Argo so compelling is that the plot sounds so outlandish and insane, it can only be from Hollywood. Guess what? It actually happened. You gotta love it when a small but crucial event in history comes to light, and it's just truly fascinating from all angles.

Argo is without a doubt one of the best films of the year. The film proves you don't need excessive violence, sex and swearing to tell a great story; you just need a damn good script and damn good actors. Affleck also proves that the third time is most definitely the charm. (Wonder which film would make a good double feature with Argo? Good Night, and Good Luck or Tinker Tailor Soldier Spy?)