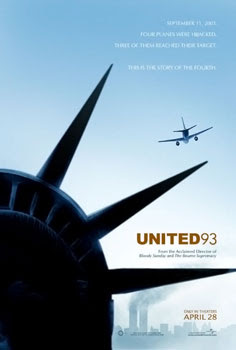 The events of September 11, 2001 are ones that will forever be in the memory of the American people, much like the attack on Pearl Harbor and the assassination of John F. Kennedy. To quote Franklin Roosevelt, it's a date which will live in infamy.

On September 11, 2001, four commercial airplanes are hijacked by terrorists. After two crashed into the World Trade Center and one into the Pentagon, the passengers and crew of the fourth plane decide to struggle against the four terrorists to take back control of the plane.

Since the movie was released not too long after the attacks, the events are still fresh in the public's memory. Paul Greengrass, who's better known to some for directing two of the Bourne movies, shows what happened on that doomed plane. Clearly the most emotional scene is when the passengers are calling family members to tell them that they love them. Heartbreaking. Is United 93 one of the best movies of the last decade? In my opinion, it's one of the most important but I wouldn't say the best.