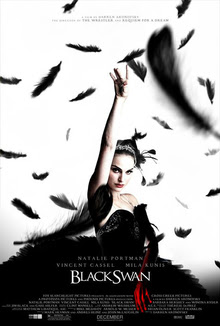 Ballet dancer Nina Sayers (Natalie Portman) is given the lead role in Swan Lake, but she finds herself competing against new ballerina Lily (Mila Kunis) to keep the role.

I don't know why, but I kept thinking of Psycho as I was watching Black Swan. Not for the psychological thriller stuff, but more so for how similar Nina and Norman are. Both are a little on the mentally unhinged side and both have (ahem) "maternal issues". Once you think that over, it's true.

My God, Aronofsky. You are definitely making a name for yourself in Hollywood. Same goes to Portman. I think a lot of people will be pretty pissed off if she doesn't win the Oscar for her haunting work. Kunis shows really strong work as well (a far cry from That '70s Show and Family Guy, don't you think?). This didn't floor me as much as Requiem for a Dream did, but "oh my God" kept running through my mind. I have three words to describe the ending: out of nowhere. And I love it.

My Rating: *****
Posted by MovieNut14 at 8:43:00 AM
Email ThisBlogThis!Share to TwitterShare to FacebookShare to Pinterest
Labels: 2010s, director: Darren Aronofsky, movies, reviews