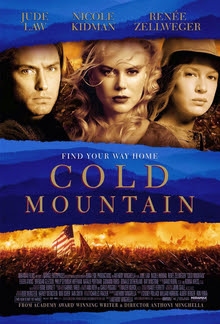 Anthony Minghella is known for three movies: The English Patient (which got him an Oscar), The Talented Mr. Ripley (my personal favorite) and Cold Mountain.

As the Civil War starts coming to an end, wounded soldier Inman (Jude Law) makes the perilous journey to get back home to Cold Mountain, North Carolina and his sweetheart Ada Monroe (Nicole Kidman).

The performances from Law and Kidman are really good. I fail to see the backlash towards Renee Zellweger. I mean, she wasn't that bad though I gotta agree that she didn't really deserve that Oscar. The rest of the cast is just crazy. A number of notable names are in supporting roles or bit parts (Brendan Gleeson, Ray Winstone, Philip Seymour Hoffman, Donald Sutherland, Giovanni Ribisi, Natalie Portman and Cillian Murphy to name a few). I also love the fact that most of the cast isn't from America and yet they speak with flawless Southern accents. The cinematography is lovely (well, what do you expect from a Minghella picture?). The rest of the movie? I thought the romance was a tad too gushy for my tastes (though Law and Kidman do have convincing chemistry). I also thought it could have been a little shorter. But still, I managed to like Cold Mountain enough to give it the rating I did.

My Rating: ****
Posted by MovieNut14 at 9:11:00 AM
Email ThisBlogThis!Share to TwitterShare to FacebookShare to Pinterest
Labels: 2000s, director: Anthony Minghella, movies, reviews