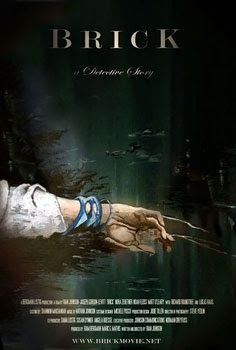 After seeing Inception, I got interested in other movies with Joseph Gordon-Levitt. Since seeing it, I saw 10 Things I Hate About You and (500) Days of Summer, now Rian Johnson's directorial debut Brick.

After finding his ex-girlfriend dead, Brendan Frye (Gordon-Levitt) begins an investigation into her murder. He gets involved in an underground drug ring that may tie in the murder.

Recently I've taken an interest in film noirs, so it's no surprise that I really liked Brick. Gordon-Levitt gives probably the performance of his career (though my personal favorite of his is (500) Days of Summer). The mood throughout mirrors that of film noirs of the past. But I felt a little underwhelmed by it. But still, I liked Brick very much.