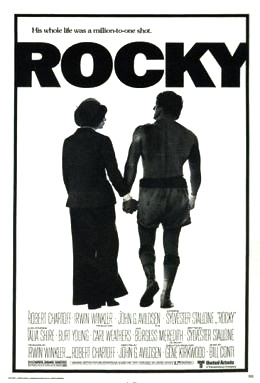 I've only seen three boxing movies, all of which are "Oscar darlings". Those three are Raging Bull, Million Dollar Baby and Rocky, the latter I shall review.

Small-time boxer Rocky Balboa (Sylvester Stallone) is given the opportunity of a lifetime when flashy heavyweight champion Apollo Creed (Carl Weathers) offers him a shot at the title.

Back when this won Best Picture, I would assume that a lot of people agreed with the decision. But now, I think those same people wanted Taxi Driver to win. Now don't get me wrong. I think that Rocky is really good. It's just after seeing three of the other nominees (All the President's Men, Taxi Driver, Network), I'm slightly questioning Rocky's credibility now. But still, the movie has held up after thirty-four years.

My Rating: *****
Posted by MovieNut14 at 8:13:00 AM
Email ThisBlogThis!Share to TwitterShare to FacebookShare to Pinterest
Labels: 1970s, movies, reviews