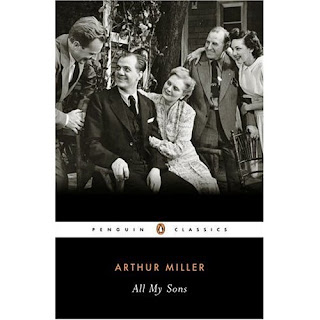 Along with Tennessee Willaims, I admire the plays of Arthur Miller. Having read three of his best-known works (The Crucible, Death of a Salesman, All My Sons), I know that he's a rather good playwright.

Joe Keller had manufactured defective airplane parts during the war, which resulted in the deaths of twenty-one men. His business partner Herbert Deever was blamed for the faulty parts and was sent to jail. Herbert's son George returns home from the war and his reaction to what has happened is stunning.

I'm starting to think that Miller had some father issues because the strained realtionship between father and son is evident in this (as well as Death of a Salesman). The dialogue is powerful and affecting, while the characters are fully developed.

My Rating: ****
Posted by MovieNut14 at 9:53:00 AM
Email ThisBlogThis!Share to TwitterShare to FacebookShare to Pinterest
Labels: plays, reviews, writer: Arthur Miller