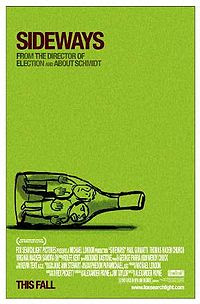 I'm trying to catch up on the top movies from the last decade. So I've managed to have seen a handful of award winners, ranging from the Oscars to Cannes.

Miles Raymond (Paul Giamatti), a divorced unpublished writer, takes his friend Jack Cole (Thomas Haden Church), who is soon to be married, on a tour of California's wine country for one last escape.

Miles and Jack are complete opposites. Miles is depressed and very much to himself; Jack is optimistic and outgoing. The differences between them made me wonder how they became friends in the first place.

Sideways is a very original concept (yes, I'm aware it's based on a book). Miles is probably the most depressed character I've encountered, but Giamatti makes Miles sympathetic. The dialogue is sharp and the characters are enjoyable to watch.