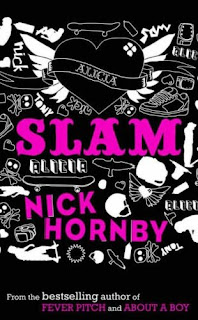 I really like Nick Hornby's writing style. It's mainly the lead character's point of view on the events going on around him as he voices his opinion of what's going on. Hey, it works.

Sam Jones is normal British teen who likes to skateboard. Well, apart from the fact his mother had him when she was a teenager herself. And history is repeating itself when Sam's girlfriend Alicia Burns finds herself pregnant.

Sam reminded me of High Fidelity's Rob since both are slightly clueless when it comes to women. But apart from that, Sam is a very original character. You really sympathize for him when he's going through hell. Being the same age as Sam and Alicia, I can pretty much see how a situation like that can cause so much stress. So of course I liked the book.

My Rating: ****
Posted by MovieNut14 at 9:22:00 AM
Email ThisBlogThis!Share to TwitterShare to FacebookShare to Pinterest
Labels: books, reviews, writer: Nick Hornby