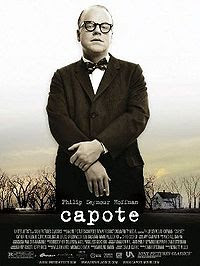 Have you ever seen a performance in a biopic that's so mindblowing you practically believed the actor was the real deal? I've encountered a few (Robert Downey, Jr. in Chaplin, Leonardo DiCaprio in The Aviator, Liam Neeson and Ralph Fiennes in Schindler's List, Sean Penn in Milk), but one of the best is Philip Seymour Hoffman in Capote.

In 1959, Truman Capote (Hoffman), a popular writer for The New Yorker, learns about the horrific and senseless murder of a family of four in Holcomb, Kansas. Inspired by the story material, Capote and his friend Harper Lee (Catherine Keener) travel to the town to research for an article. However, as Capote digs deeper into the story, he is inspired to expand the project into what would be his greatest work, In Cold Blood.

I honestly did double takes when Hoffman first appeared on screen. As the movie progressed, I realized Hoffman isn't just portraying Capote; he is Capote. And having recently read In Cold Blood, this just drew me in.

My Rating: ****1/2
Posted by MovieNut14 at 10:56:00 AM
Email ThisBlogThis!Share to TwitterShare to FacebookShare to Pinterest
Labels: 2000s, director: Bennett Miller, movies, reviews