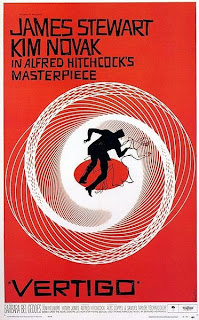 Alfred Hitchcock is one messed-up man. It's like every movie I've seen by him (The 39 Steps, Rear Window, Psycho, Vertigo) gets more progressively messed-up. And to prove it, I will be reviewing, in my opinion, Hitchcock's most messed-up film, Vertigo.

After retiring from the police force due to his fear of heights, John "Scottie" Ferguson (James Stewart) is hired by a friend to watch over his wife Madeleine Elster (Kim Novak). Scottie agrees, but soon finds himself attracted to her, even though she seems possessed by a spirit of the past.

Man, this had a whole level of weird. Knowing Hitchcock, what do you expect? As for Stewart's performance, he managed to scare the hell out of me by the end of the movie.