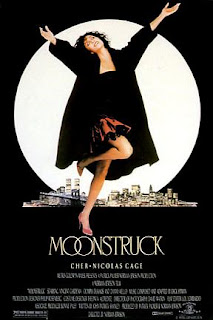 Usually, I'm not a big fan of romantic comedies. Moonstruck, however, is different.


Loretta Castorini (Cher) is a widow in her late thirties who decides to remarry. She accepts the proposal of Johnny Cammareri (Danny Aiello), who, after proposing to Loretta, flies off to Italy to visit his ailing mother. When in Italy, Johnny calls Loretta to tell her to talk to his brother into coming to the wedding. Loretta goes to talk to Johnny's brother Ronny (Nicolas Cage), who has a grudge against Johnny because he claims he lost his hand and fiancee because of him. Loretta finds an interest in Ronny's poetic and passionate ways, and falls for him.


The movie itself was very good, as was Norman Jewison's direction. Cher and Olympia Dukakis were also very good and earned the Oscars. Though I'm unsure why the Academy overlooked Cage's performance, which I thought stood out more.