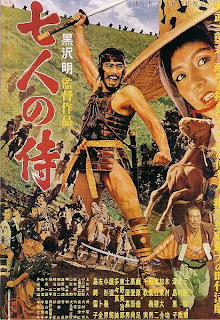 A village is at risk for being pillaged by a group of bandits. Several of the villagers go to another town to find samurai to guard their village. After seeing the heroic deeds of Kambei (Takashi Shimura), they ask him to help the village. He accepts, and soon five more samurai are recruited. It isn't until the clownish but determined Kikuchiyo (Toshiro Mifune) joins in and complete the troupe.

Sure, the movie's over three hours long, but it goes by like that due to the strong story-telling by Kurosawa. The action is gripping and the movie is beautifully shot. Now I know why a certain blogger is so in love with this piece of cinema history.