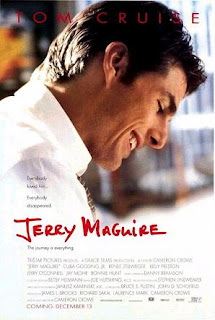 Now and then, it's hard to find a movie that both men and women will be willing to watch. But there are a few diamonds in the rough, one of them being Jerry Maguire.

After suffering a nervous breakdown from stress and a guilty conscience, sports agent Jerry Maguire (Tom Cruise) ends up writing a mission statement on dishonesty in the sports management business and how he feels it should be run. His co-workers greet him with applause the next business day, although some are planning to fire him. That happens, and Jerry's competing with Bob Sugar (Jay Mohr), a co-worker, to get more clients. Jerry can only get through to Rod Tidwell (Cuba Gooding, Jr.), the wide receiver for the Arizona Cardinals who finds his contract inferior to his teammates'. After his chat with Rod, Jerry announces he's starting his own agency, and the only person that goes with him is single mother Dorothy Boyd (Renee Zellweger).

The movie had its moments, most of them with Gooding. And, of course, it's unbelievably quotable. Oh, as if you haven't said "Show me the money!" at least once in your lifetime.