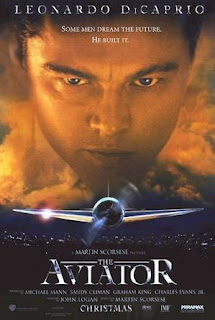 With Shutter Island coming out later this week, I thought it would appropriate to review another movie Martin Scorsese did with Leonardo DiCaprio.

Howard Hughes (DiCaprio) has managed to become a well-known name, thanks in part to his aviation accomplishments, the movies he backed, and his relationships with Katharine Hepburn (Cate Blanchett) and Ava Gardner (Kate Beckinsale). However, Hughes also managed to become a well-known name from his bizarre behavior brought on by his obssessive-compulsive disorder, and the trouble he got in with Pan American Airlines owner Juan Trippe (Alec Baldwin) and Senator Owen Brewster (Alan Alda).

This was a helluva performance from DiCaprio. I mean, one minute he's the pretty boy from Titanic, next minute he's exposing his dramatic side (and then some). Blanchett was also outstanding for her work as Katharine Hepburn, though seeing a movie featuring Hepburn prior to seeing The Aviator would be helpful.

My Rating: ****1/2
Posted by MovieNut14 at 10:37:00 AM
Email ThisBlogThis!Share to TwitterShare to FacebookShare to Pinterest
Labels: 2000s, director: Martin Scorsese, movies, reviews