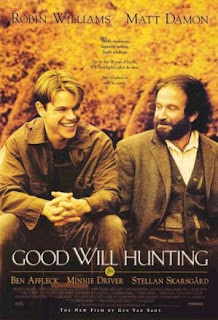 Matt Damon probably wouldn't have pictured that a screenplay he originally wrote for an English class while attending Harvard would garner critical acclaim. Well, he did and received an Oscar, along with his friend Ben Affleck, for writing it.

Although Will Hunting (Damon) has a high IQ, photographic memory and a gift for mathemathics, he has a job as a janitor at MIT and lives in a rundown building in a South Boston neighborhood. His talents are discovered by Professor Gerald Lambeau (Stellan Skargard), a Fields Medalist. After Will is arrested for getting into a brawl, Lambeau gives Will an offer: either go to jail, or be released under Lambeau's personal supervision and see a therapist. Will chooses the latter, although he believes he doesn't need therapy. After going to five different therapists, Lambeau desperately goes with Sean Maguire (Robin Williams), his college roommate.

I really liked much of the movie, particularly Williams' performance. In my opinion, Williams and the screenplay were the highlights of Good Will Hunting.