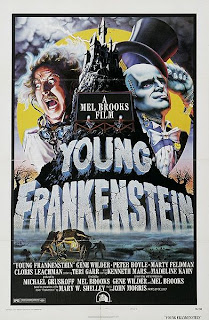 Mel Brooks has an interesting career. He won an Oscar for his first movie, is one of the few people to have an Oscar, an Emmy, a Tony and a Grammy (his wife Anne Bancroft was close to accomplishing that feat) and has directed some of the funniest movies of all time. One of them is Young Frankenstein.

Dr. Frederick Frankenstein (Gene Wilder) ("It's pronounced 'Fronk-en-steen'.") finds out he inherited his family's castle. After meeting such characters as Igor (Marty Feldman), who pronounces his name "Eye-gor", and Frau Blücher (Cloris Leachman), whose name causes horses to whinny, he also meets his new lab assistant Inga (Teri Garr) who is more sane than the other two. Frederick and Igor successfully obtain a corpse to re-animate, but Igor destroys the desired brain by mistake and grabs one that's abnormal. Problems arise when not only the Monster (Peter Boyle) is on the loose, but when Frederick's uptight fiance Elizabeth (Madeline Kahn) comes.

I'll admit it has been some time since I've seen this, but I remember enough that this is a very funny movie. I mean, who doesn't crack up from Igor's side-changing hump ("What hump?") or from the "Puttin' on the Ritz" bit? Sure it's typical Mel Brooks in some scenes, but it's still hilarious.

And now, the "Puttin' on the Ritz" scene: