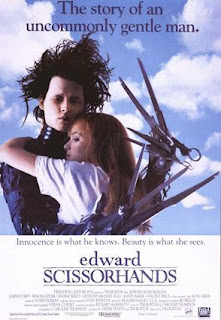 It's hard to believe that one of Tim Burton's more memorable movies started with a sketch he drew as a teenager.


Edward Scisscorhands opens with an elderly woman reciting the story of a man named Edward (Johnny Depp) who has scissors for hands. He was created by an aging inventor (Vincent Price) who died before he could give Edward hands.
Years pass, Avon saleswoman Peg Boggs (Dianne Wiest), after failing to make profits in her neighborhood, ends up going to a gothic castle on top of a hill. There, she finds Edward and brings him home with her. Edward befriends Peg's son Kevin (Robert Oliveri) and daughter Kim (Winona Ryder). Peg's neighbors find out that Edward has a talnet for hedge clipping and haircutting. Although Edward becomes popular, two people dislike him almost immediately: religious fanatic Esmerelda (O-Lan Jones) and Kim's jock boyfriend Jim (Anthony Michael Hall). Joyce (Kathy Baker), a "lonely housewife", tries to seduces Edward, but to no avail. After a robbery staged by Jim with Edward as the culprit, Kim dumps Jim to be with Edward.

As you can imagine, I liked Edward Scissorhands very much. From I've read, Depp watched numerous Charlie Chaplin movies in preparation for the role to "create sympathy without dialogue." And yes, because I'm a fan of Mr. Burton, I just LOVED this movie.