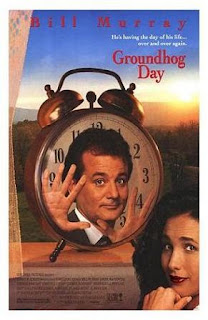 Weatherman Phil Connors (Bill Murray), his producer Rita (Andie MacDowell) and cameraman Larry (Chris Elliot) are sent to Puxsutawney, Pennsylvania to cover Groundhog Day. Phil, growing tired of the assignment, gives the report and attempts to go back to Pittsburgh when a blizzard forces Phil and his crew to stay an extra day.

Then things get weird.

Phil finds himself reliving February 2nd . Only he's aware of the time loop, while everyone else is oblivious to it. At first he's confused then he embraces it by getting away with anything, like stealing, seducing women and driving drunk.

There were two scenes that just killed me.
~The first one is when Phil and Rita are in the restaurant. The table's covered with junk food, Phil's smoking, making Rita concerned about his health. Phil shoves a piece of cake in his mouth, causing Rita to turn away in disgust, then he asks, with his mouth still full of cake, "What?"
~The second scene is when Phil continually tries to kill himself. He sticks a toaster in the shower, runs in front of a car, and jumps off a building. All this result with him waking up the "next" morning.

My Rating: ****1/2
Posted by MovieNut14 at 2:47:00 PM
Email ThisBlogThis!Share to TwitterShare to FacebookShare to Pinterest
Labels: 1990s, movies, reviews