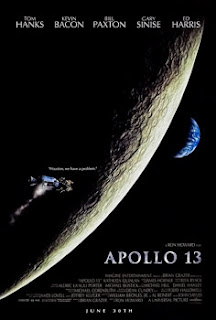 "Houston, we have a problem."
With that line, panic struck Mission Control at NASA on April 13, 1970. Based on actual events, Apollo 13 is engaging from beginning to end.
Less than a year after man walked on the Moon, NASA is sending up another module to the Moon. The astronauts on this mission are Jim Lovell (Tom Hanks), Fred Haise (Bill Paxton) and Jack Swigert (Kevin Bacon). Everything looks normal shortly after takeoff, however just days later a technical malfunction has them fighting for their lives. At Mission Control, astronaut Ken Mattingly (Gary Sinise), flight director Gene Kranz (Ed Harris) and the ground crew try to bring the astronauts home alive.
Having already seen another Ron Howard movie based on true events (A Beautiful Mind), I kinda already knew what to expect. But compared to A Beautiful Mind, Apollo 13 is, as previously stated, more engaging.
My Rating: ****1/2
Posted by MovieNut14 at 11:36:00 AM
Email ThisBlogThis!Share to TwitterShare to FacebookShare to Pinterest
Labels: 1990s, director: Ron Howard, movies, reviews