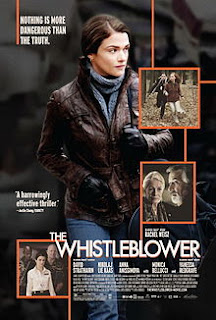 Any film involving with the dirty side of justice is usually a compelling one. They show how depraved honest people can become when in certain conditions. It's really unsettling stuff sometimes.

Larysa Kondracki's The Whistleblower is the newest title that focuses on the unfortunate matter. Focusing on the international legal system, the film chronicles the dark influence the power of the badge has. And it's a very dark influence.

The film stars Rachel Weisz, who is one of the better actresses working today. Here, she stars as Kathy Bolkovac, a police officer who discovers a huge conspiracy among her ranks. It's not Weisz's best work, but it's definitely ranked among them.

Bolkovac is sort of the female equivalent of Frank Serpico, the eponymous anti-hero of Sidney Lumet's 1973 film. She risked her reputation (and her life) to maintain the sanctity of society. It's a bold move by any means, regardless of occupation, gender or any factor of life.

The Whistleblower shines in spots (thanks in part to Weisz), but it's nothing truly special. It does succeed in bringing the crime of human trafficking to light, but it doesn't do much else. There is some nice cinematography from Kieran McGuigan but apart from that and Weisz's performance, there's not much to write home about. It's worthy of a look to those curious however.

My Rating: ****
Posted by MovieNut14 at 11:21:00 PM
Email ThisBlogThis!Share to TwitterShare to FacebookShare to Pinterest
Labels: 2010s, movies, reviews