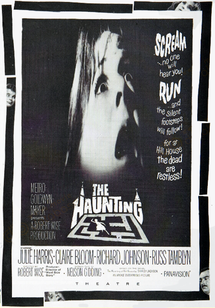 I admire directors who dabble in different genres. Anyone who can depict a variety of different subjects with complete ease is bound to be someone I'll like. (That is precisely why I like George Cukor and Howard Hawks so much.)

Another noted director is Robert Wise. He has done a number of varying genres from musical (West Side Story, The Sound of Music) to sci-fi (The Day the Earth Stood Still) to war (Run Silent, Run Deep) to sports (Somebody Up There Likes Me). Then again, can you really go wrong with the man who also edited Citizen Kane?

Wise also dabbled with horror in the form of The Haunting, which he amusingly made between his two Oscar-winning musicals. This is practically a textbook example of what a horror film should be like. (Seriously, Hollywood. Quit fucking around with unwanted sequels and remakes.)

The main draw of The Haunting isn't just the story Wise is telling. It's also the acting, especially Julie Harris. The unhinged nature of her character can be compared to Catherine Deneuve in Repulsion two years later. A far cry from her work in East of Eden, that goes without saying.

The Haunting definitely ain't your typical haunted house film and believe me, that's a very good thing. That creepy cinematography is just divine, precisely what a horror film should be presented as to the masses. Bravo, Mr. Wise.