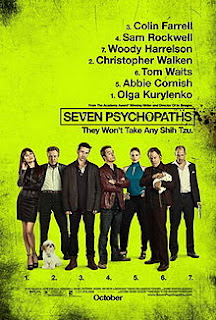 It's weird. When I saw In Bruges a few years back, it left me feeling nauseous. (That finale was gruesome.) Yet when I saw Martin McDonagh's new film Seven Psychopaths, I didn't feel the same way afterwards. (Then again, I did get my fill of Scorsese, Tarantino and Refn by then.)

Seven Psychopaths is actually quite similar to In Bruges. The main differences are the location and the actors. Instead of a film set in Belgium starring Brendan Gleeson, Colin Farrell and Ralph Fiennes, you've got a Los Angeles-set film starring Farrell, Sam Rockwell and Woody Harrelson. (In those exact roles nonetheless.)

Apparently McDonagh has a penchant for three particular characters: the disoriented average Joe (played here by Rockwell), the straight man (Farrell) and the trigger-crazy madman (Harrelson). I'm not complaining, mind you. I just wonder if his future films will have those specific characters.

Anyway, onto the actors. Rockwell was my favorite with Farrell and Harrelson a close second. Christopher Walken and Tom Waits were also quite entertaining. Oh, and the cameos by Michael Stuhlbarg, Michael Pitt and Harry Dean Stanton were a nice bonus. I must say, McDonagh knows how to pick choice actors.

Seven Psychopaths is a little better than In Bruges but not by a significant amount. The actors are entertaining as is McDonagh's script. Try to catch it when it's in theaters because there's a certain allure to it that way.

My Rating: ****1/2
Posted by MovieNut14 at 2:44:00 PM
Email ThisBlogThis!Share to TwitterShare to FacebookShare to Pinterest
Labels: 2010s, movies, reviews