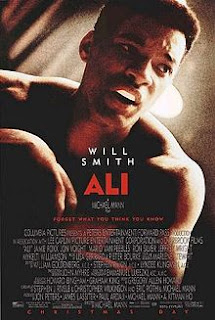 Raging Bull. Rocky. Somebody Up There Likes Me. These are a few titles that spring to mind when great boxing films are discussed. The reason is simple. They know how to depict the life of the boxer both in the ring and out.

If only I could say the same for Michael Mann's Ali. I mean, I don't blame Mann for trying to tell a tale. I just blame him for trying too hard. (I don't like it when good directors stoop to that level.)

I do, however, admire Mann for providing the brief backstory of Muhammad Ali (Will Smith). He pretty much chronicles the pivotal events in Ali's professional life, which, in this case, were during the mid to late 1960s. (This of course was an era where everyone and everything was changing.) It's not like what Mann did with The Insider, but Lord knows it's better than Public Enemies.

Smith is pretty much perfect as Ali. He's charismatic and knows how to get people to like him. But as Ali, he makes a few enemies. Just goes to show you that even the greatest have their downfalls.

Ali clearly has its flaws, but Smith (as well as Jamie Foxx) keep it afloat. Perhaps the main flaw of the film is simply that the story doesn't go anywhere. It just...stays put. But as I said earlier, even the greatest have their downfalls.